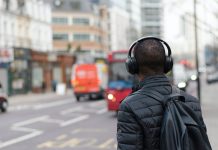 EARTHGANG released the first part of their animated series in collaboration with Strangeloop Studios. The first video in the series is for “La La Challenge”.They created a chaotic and technicolor wonder video for the intro track on their critically acclaimed album, Mirrorland. It first premiered as part of FADER’s first ever Digital Fort yesterday. The “LaLa Challenge” video showcases Olu and WowGr8 as traveling adventurers, in the magical world of Mirrorland inspired by “The Wiz” (1978). Animals, humans, cyborgs, aliens and more cohabitate together on this planet. Together they are EarthGang.

EARTHGANG have been making the most of their quarantined period. They have been working on a new Spillage Village album, and most recently joining menswear e-commerce site Chinatown Market to “Make a T-Shirt Live.” They made exclusive t-shirts for sale where part of the proceeds went to benefit Gooder helping Atlanta Public Schools. Read more on this via Forbes HERE.

Strangeloop Studios is a new media content studio, telling stories across real-world and digital platforms. Their clients include Kendrick Lamar, The Weeknd, Pharell, SZA, Eryka Badu and many more. Strangeloop also produces and creates original IP including the Children Of The Void short and the forthcoming Spirit Bomb project.

Let us know what you think about EARTHGANG’s new video for “La La Challenge” in the comment section below!

Stay tuned to Hypefresh for the latest news in Hip Hop!

Medical vs. Recreational: This Is Weed In 2019

Apple to move manufacturing to India