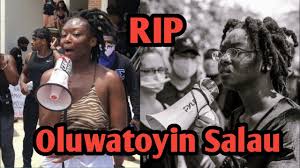 Oluwatoyin Salau a young woman who has been recently reported missing, now found dead on June 13th. Oluwatoyin was an activist for the Black Lives Matter movement, she led some protests in Florida and was a member of Movement 850. Movement 850 is a group of “student leaders and community residents working together to demand justice and policy change”. Continue reading further for the full story of Oluwatoyin, from missing to dead.

Two days before she was reported missing, she was looking for shelter at Kearney Center.

The staff at the Kearney center gave her some phone numbers to contact for emergency shelter.

However, during the police investigation, it showed that Oluwatoyin never connected the phone numbers the staff provided her.

The day Oluwatoyin went missing, she tweeted something that made everyone worried.

She tweeted that: that a man molested her that morning around Park Avenue and Richview Road. She said the man offered to give her a ride back to a church where she had sought “refuge” because of “unjust living conditions.”

Several people on twitter tried to reach out to Oluwatoyin to make sure she is okay. She never used her social media after that tweet.

On June 13th, the police located Oluwatoyinn on Monday Road in Tallahassee. Her family came to confirm it was her body on Monday.

She was found dead with another victim, named Victoria Sims. Victoria was a 75-year-old retired state worker and grandmother well-known for her volunteerism and work in local Democratic politics.

Her body was also confirmed on that Monday.

The police are still investigating the case, but they have a suspect in custody. His name is Aaron Glee Jr. and more details are to come.

What do you think of the case?

In the wake of the novel ...
Read more
Geek Culture