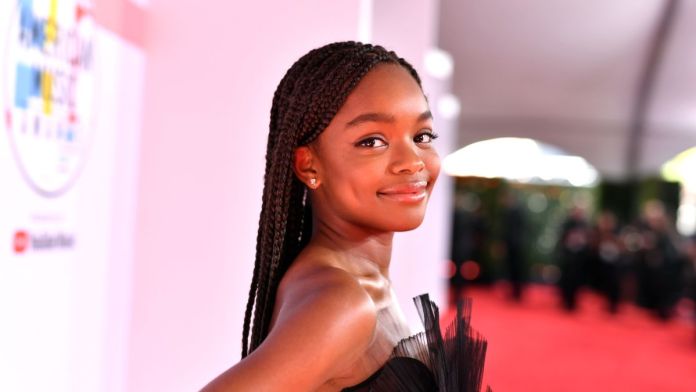 Despite her age, Marsai Martin is making a huge name for herself amongst her Hollywood peers.

The 14-year-old hurdled herself into a position of power never seen before in her industry. Martin is now the youngest person EVER in Hollywood to serve as a film’s executive producer. And did we mention she’s black!

Martin is most known for her role on ABC’s hit sitcom Black-ish. She plays young Diane Johnson– the brutally honest, and sometimes scary, daughter.

But as it turns out, Martin’s character on Black-ish has prepared her for yet another milestone in her career. Not only is Martin the executive producer of Little, she also stars in the film.

Little is a “body-switching comedy” that sees Martin playing a younger version of the film’s character, Jordan Sanders, while Regina Hall plays the adult version. It hits theaters April 12.

Martin says her favorite chilhood movie, Big, inspired her to pitch the idea for Little. “It was one of my most favorite films growing up,” said MM. “After the Season 1 finale of Black-ish, we told Kenya Barris about it, and he called Will [Packer] and said: ‘Yo, you know the girl who plays Diane on Black-ish? She has this dope idea!’”

So remember the name Marsai Martin. She’s onto big, not little, things!

So, will you be going to theaters to watch this movie once it comes out? Let us know with a comment!

After, be sure to keep it locked on hypefresh for more culture!

Level Up With The Nike SF AF1 QS

Scotland is Introducing LGBTI Curriculum to All it’s School Children

A Salute To The Coolest Hip Hop Dads In Hollywood