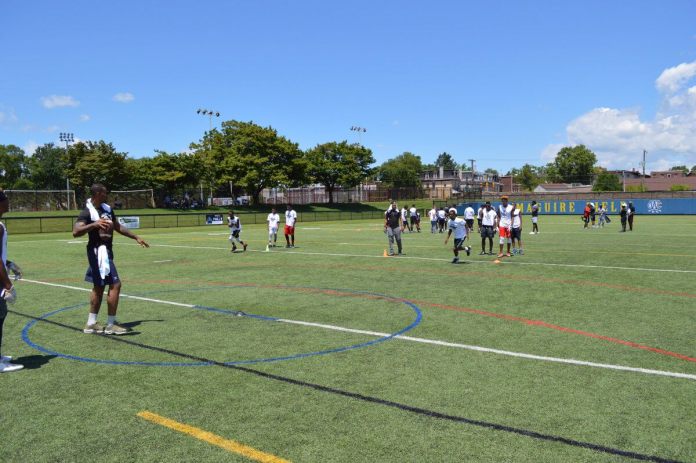 Hailing from Philadelphia, Houston Texans’ Wide Receiver Jaelen Strong doesn’t fit into the box of a traditional NFL player. Most football players are only interested in football. On the field, Strong’s poised to breakout in his third year. But, Strong realized the platform he obtained by being drafted into the NFL right away. Off the field, Strong established his annual Legends of tomorrow football camp in his hometown free of charge. And, he brings other players with him every year.

Strong established the camp alongside his SNPGD organization in 2014 for other youth, ages 7-17, football players with NFL aspirations as well, and plays host to approximately 300 kids.

“I have a team, there’s seven of us, and in that team no man is bigger than the other” Strong said. “We all come up with things together, and it was our idea to give back to the kids, and have a camp.”

More impressively, unlike most football camps where the NFL players are solely there for good publicity, players at Strong’s camp were perpetually involved in the drills they were leading, pulling players aside to correct or congratulate their performance. Essentially, the players treated the kids as sons of their own, realizing they were role models. Strong said he looked for “character”, “humility”, and “perseverance” in his role models, something his road to the NFL entailed.

Attention to detail was given on the hot summer day, and each player made themselves approachable for a picture, a handshake, or conversation. I, myself, introduced myself to Los Angeles Running back Todd Gurley, a Legends of Tomorrow participant the last couple of years. Gurley was genuine, but made it clear he didn’t want to talk about fantasy football. For the record, I’ve projected him for a bounce back season, and would draft him in the second round.

Houston Texans Wide Receiver Deandre Hopkins was immersed with the kids throughout the day, and I didn’t try to introduce myself. However, the fact he, and the other players, were there speaks volumes to how much they care about the youth. But, Strong’s presence was vital as well, as it provided an example to the Philadelphia kids with the same dreams of playing in the NFL that it could happen with a little luck, but mainly hard work.

“(Community outreach), it’s real important, just seeing the turnout today, just how many kids we get to touch and impact here,” Strong said. “So, hopefully we get to do more events.”

Other than his football camp, Strong holds an annual turkey drive in Germantown. Strong said “You’ve got to be in the community”.

Coming out of high school, Strong fielded a slew of division 1 offers, but initially attended junior college in 2011 due to his grades. However, that didn’t stop him from becoming the 70th overall pick in the third round of the 2015 NFL Draft. In fact, the Houston Texans traded up to select the Arizona State Wide Receiver. But before that, Strong had to become the man of the house at age 9 after his father died of leukemia in 2003, according to Philly.

In addition, Strong’s father passing didn’t take a noticeable toll on him until high school when he attended West Catholic, following his father’s footsteps. Strong had a rebellion phase after deciding to attend West Catholic. Strong said to Philly he thought any male authority figure was trying to be his “dad”.

“The city life is rough, man,” Strong said. “It’s hard to branch out, and do your own thing. You just have to find what fits you, and stick to it as best as you know how no matter what anyone says.”

Eventually, Strong shifted the pent up aggression onto the football field. And after enrolling into Arizona State University, Strong said to azcentral sports he “needed a dad” to tell him “how to do things, to have this kind of character, to do things the right way, and that’s what I have found here.”

Because of his platform, Strong, 23, now finds himself as a dad, or role model, to kids in his hometown.

Lauryn Hill Is A Grandmother

NAO Reveals Her Debut Album “For All We Know”