Recently, Florida has been gaining a lot of buzz on the rap scene with artists like Kodak Black, XXXTentacion, Lil Pump, and many others making big names for themselves. Another artist who seems to be budding on the list of being one of Florida’s next breakout stars is Def Jam’s newest signee, and Jacksonville’s very own, Trap Beckham. He initially gained fame within Jacksonville for his 7.14.12 mixtape, which spawned his self-produced regional hit “Top of The Line.”. His big break so far, though, and what made Def Jam decide to get ahold of him, was his song “Birthday Chick,” which is played at clubs and parties nationally and was featured on Now That’s What I Call Music! 59. I recently got the chance to interview the rapper, and we talked his career in terms of who he feels has influenced him and what other routes he plans to take musically.

On the come up, we spoke about what had initially made him start making music at the young age of eight years old. “I don’t know, it was just in me,” Beckham said in response. “I was way more into what people thought about it back then I would just rap it to my cousin.” Then, when we talked about confidence in music, he admitted that “once you go in and everybody show you love, it’s different.”

When speaking about influences, he said Michael Jackson was a big icon in his life, but T-Pain dropping Epiphany was an important change in his writing, in the way that T-Pain would do his transitions from the verse to the hook, back to the verse. Overall, T-Pain’s impact in the whole rap game was influential to him. He also cites Kanye as a big artist to him, stating “I listen to The Life of Pablo damn near every day.” His deeper music tends to be inspired through Kanye’s approach. “It makes me not want to hold back, because he’s not holding back.” Another inspirational artist of his music is definitely Uncle Luke, because he introduced the bass music that helped create his songs “Birthday Chick” & “Lil Booties Matter.”

Initially his name was Young Trap, and he still gets called that in his city, and he added the Beckham in 2011 because the name Young Trap was already copy-written.

He co-produced his first single “Top of the Line” and “Lil Booties Matter,” and has been co-producing his music for the past few years, but he doesn’t plan to produce for anybody else until the situation is right and the opportunity presents itself.

He decided to drop a mixtape for his birthday every year, because he didn’t know what to call it, so he decided to make it a birthday present for himself. The mixtape, 7.14.10, was so successful within his city, that he decided to do it the next year and it became a tradition for him to continue doing it every year since. It’s also the mixtape that he feels most proud of creating so far, because that’s when he gained his fan base.

When speaking about his future projects, he said that there aren’t too many songs like “Birthday Chick,” and “Lil Booties Matter,” because there is so much versatility. He doesn’t want to be put into one box, when he feels like he is more of a lifestyle rapper than a certain kind of rapper. Also, to help with his versatility, he wants to make songs with artists of other cultures to bring their culture to life on his records.

When speaking about if he never became a rapper, he said that no matter what, his life was always going to be dedicated to music. Whether he’d be a DJ, party promoter, or anything along those lines.

His first EP “Life Is Lit,” featuring his two singles “Birthday Chick” and “Lil Booties Matter,” also with a few skits from DC Young Fly, is projected to come out on October 20th on Apple Music, Spotify, and every streaming site, so be sure to check it out! 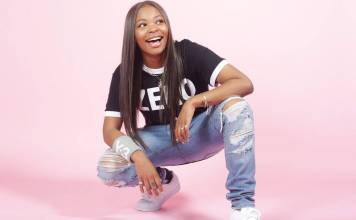 Carmelo Anthony Gets Another Chance In The NBA

Gears of War movie gets a Brand New Screenwriter

Lil Nas X Says He Is Taking A Break From Music