BIA dropped a new track, Entitled “Whip It,” the Cardo andJohnny Juliano-produced street ballad which is raw and uncut, living up to the i am OTHER / RCA recording artist’s self proclaimed “Perico Princess” moniker. The release of the new song is accompanied by the announcement of the Boston native joining Pusha T’s ‘Darkest Before Dawn’ Tour, which kicks off March 3 in Vancouver, Ca. Stream the hard hitting track along with the ‘Darkest Before Dawn’tour dates below and expect for K.O.W. to drop early April! Last fall, BIA shook up the net with her Future sampling ode R&B legend “Bobby Brown.” Today, she debut’s the first single off her highly anticipated ‘Knock On Wood’ project. Check it out below! 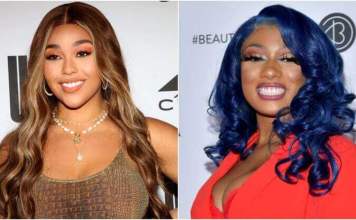 Jordyn Woods and Megan Thee Stallion Got That Pussy Power

Cardi B is a Boss Bitch! Holds Birthday in Power Outage!